My favorite holiday, Halloween, is just around the corner, and I wish you knew how excited I am! I grew up trick-or-treating with the neighborhood kids in our city’s most posh neighborhood until homeowners ran out of king-size candy bars or my pillowcase was too heavy to carry! It was practically an Olympic sport!

You bet Halloween decorations went up in my house the day after Labor Day and I even created these paper luminaries to add to my growing Halloween decor collection. #craftingghouls #ilovepuns

This set of paper luminaries was a cinch to make using my Silhouette CAMEO cutting machine and this cut file featuring an adorable trio of ghosts.

In Silhouette Studio, set up your paper luminary with a row of “x’s” near the top edge. I used a lowercase “x” in League Spartan font with 170% character spacing. I centered the text to the page. Next, I separated the trio of ghosts so that I used one ghost per luminary. Before I sent the project to be cut, I also made sure the ghost was centered on the page.

Each luminary was cut from Orange Zest Card Stock using the following cut settings: Blade 5, Speed 5, and  Force 20 with Double Cut selected. This could be slightly different on your machine, so I recommend doing a test cut first.

To create the tiered appearance, each luminary was a different height.

After each luminary is trimmed, I cut a piece of vellum that was slightly larger than the ghost shape and adhered to the inside of the luminary using scrapbooking adhesive. 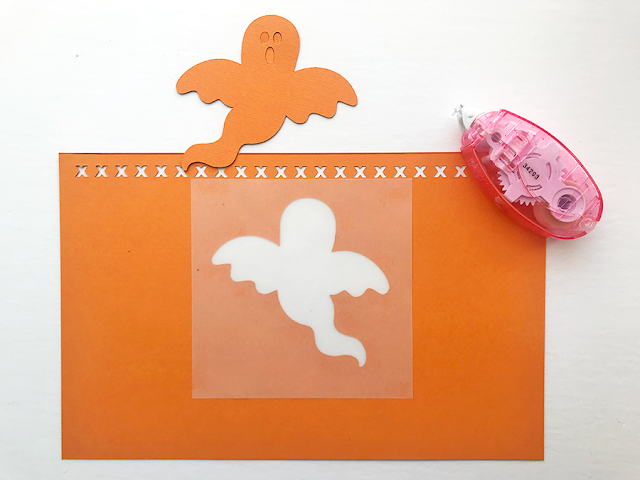 Then, I flipped it over, put the paper ghost cutout back in (like a puzzle), squeezed a small dab of Tombow Mini Liquid Glue for the eyes, and removed the ghost cutout.

Lastly, I secured the paper luminary short ends together using a combination of scrapbooking adhesive and craft glue. Pressing down firmly helps ensure the glue/adhesive make good contact and you can even binder-clip or chip-clip the top/bottom edges for extra security until it’s fully dried.

Since these luminaries are made out of paper, I highly recommend using battery-operated tealights for safety reasons. If you could find the flickering kind, extra creepy kudos to you!

This project was super quick to pull together that I’m thinking about making a bunch more to line up the walkway to our front door. Where would you add these paper luminaries in your home? Share your ideas by commenting below!